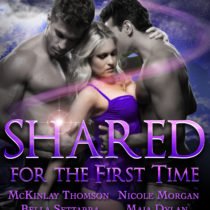 Shared for the First Time: A Paranormal Menage Romance Boxset 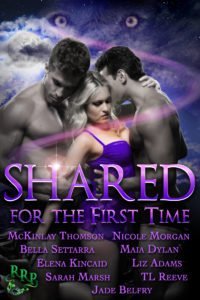 A buzz of warm joy filled Rose’s belly when the cowboys returned to her cabin on the train. Pretending to be asleep, she cracked open her eye a touch to watch them enter.

“Quieter,” Clay hissed in a whisper. “You’ll wake her.”

“I’m moving as quiet as I can. It ain’t my fault my coat’s rubbing sounds like a wheezing old man.”

“Well, your whining about my yappin’ is making even more noise,” Jesse said.

She stifled her laugh.

Violets? Weren’t they gonna strip and get in their pajamas? It wasn’t fair. They got to see her naked, she should get to see them naked. It was why she’d left the light on, for heaven’s sake.

She smiled at her own thoughts. Her sister would have been proud at her naughtiness.

The men sat across from her on the cushioned banquette and threaded flowers on a string with a needle. Since when did cowboys busy themselves with flowers? After several minutes of watching them work through a sneaky eye, curiosity got the better of her.

She sat up. Her blanket fell to her waist revealing her modest nightgown. “What are you boys doing?”

“I wasn’t sleeping.” Enough courage formed for her to be honest. “I was waiting for you to change into your pajamas, so I could get a look at you in the buff. What are you doing with those violets?”

“Yes.” She crossed her arms. “When I was a little girl. With all my little girlfriends.”

“There ain’t nothing wrong,” Jesse said. “It ain’t like we’re trying to ward off some dead weirdos or anything.”

Clay threw a violet at him. “Shut up, Jesse.”

“Let’s talk about something else,” Clay said to her. “You wanted to see us get naked?”

She was about to tell him not to change the subject, but heavens, if she had to talk about something else, that was one good subject.

“Are we what?” Jesse asked.

Clay chuckled. “I’m afraid we’ve got a busy night ahead of us.”

“How disappointing.” Rose put on her best pout. Sure was fun to flirt with these guys.

“But if you want to get naked again,” Jesse offered.

Clay threw another flower at him.

“What’d I say?” Jesse reached over Clay and confiscated his mess of violets. “I’ve had enough of you throwing flowers at me.”

Clay switched his work to stacking the completed flower necklaces while Jesse continued making them.

“Say,” Rose said. “You two wouldn’t happen to be,” how should she put this… “eating both sides of the waffle now, would you?”

Jesse scowled. “Both sides of the what now?”

Jesse threw down his necklace. “What in the world of cattle prodding makes you think I’m a bull-tail chaser?”

She gestured to the flowers.

Jesse eyed all the violets. “What? No! This is just—”

What was Clay so concerned about Jesse revealing?

Jesse picked up his necklace and continued threading flowers to it. “Just so you know, I would never hang out with any bull-tail chaser.”

Jesse flinched. “You telling me Paul’s a bull-tail chaser?”

“Why?” Rose asked. “There ain’t nothing wrong with loving someone, man or woman.”

“Maybe not,” Jesse said. “But Paul’s seen me naked. Thinking of him being a bull-tail chaser and seeing me naked gives me the crawlers.”

She leaned over and took Jesse’s hand. “Well I, for one, envy him for what he’s seen.”

Jesse grinned, his cheeks reddening. He was cute when he was embarrassed.