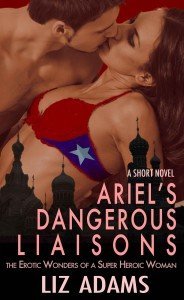 Ever wanted to craft or read about a spicy, sexy super hero like Wonder Woman?

1. The Super Factor – Whether paranormal or not, she has to have superhuman skills that can overpower most humans. Such super skills can be other-worldly, like flight, or they can be with the help of gadgets, like a utility belt. My Wonder Woman-type character, Ariel, has super strength.

3. The Evolution Factor – How did those powers evolve over time as soon as she acquired them? How did she evolve?

4. The Price Factor – Her skills should come at a cost. Perhaps she becomes weak after using her skills, perhaps her skills only work when she is in cold temperatures. In Ariel’s Dangerous Liaisons, Ariel must forsake a life of love to maintain her secret identity.

5. The Kryptonite Factor – She needs to have a weakness, something that renders her superhuman skills useless. My superhero Ariel cannot break through razor wire tied around her wrists without slicing her skin, muscle, and arteries. Such a weakness can also be one that any normal person could have. Gambling? Drinking? They can seduce her into ignoring her responsibilities.

6. The Clark Kent Factor – Does your superhero have two personas? One as a mild-mannered pert gal by day and one as a kick-ass bitch by night? We all have the dream of wearing a mask and becoming someone else, someone we’d normally be afraid to reveal. How does your superhero change when she wears a mask or catsuit or stirrups?

7. The Community Factor – How is her relationship with the community with and without her costume? Does the classroom laugh at her stutter when she’s teaching by day, and do they hang posters of her superhero persona in their lockers dreaming to be like her?

8. The S Factor – What’s her logo or symbol? What does it mean? Ariel’s symbol is like a Nike swoosh version of an eagle in flight. It’s the symbol of her ancestor’s tribe, the tribe she never got to know as a child.

9. The Robin Factor – Does she have a sidekick? Do they get along when they aren’t saving the world together?

10. The Lex Luther Factor – Does your superhero have a main enemy? If so, how did they become enemies? What super skill does the enemy have? Rather than consider who would be the opposite of your superhero, I like to go the Joss Whedon route: Think of who your readers would expect your classic villain to be, then choose something way out of left field. For example, if your hero’s ability is that she can bring daylight to any area, a reader might think the proper villain would be a man who could bring night to any area. But consider a third option. What if the master villain could turn daylight into poison? Anytime your superhero tries to use her powers, she just ends up putting innocent people into more jeopardy because the sunlight she brings in turns into poison. Now that’s conflict!

In the meantime, check out the other authors’ giveaways by clicking on the link below!

Thank you so much for joining us for the Cranberry and Spice Blog Hop. 🙂

favorite superhero, would have to be Superman
skpetal at hotmail dot com